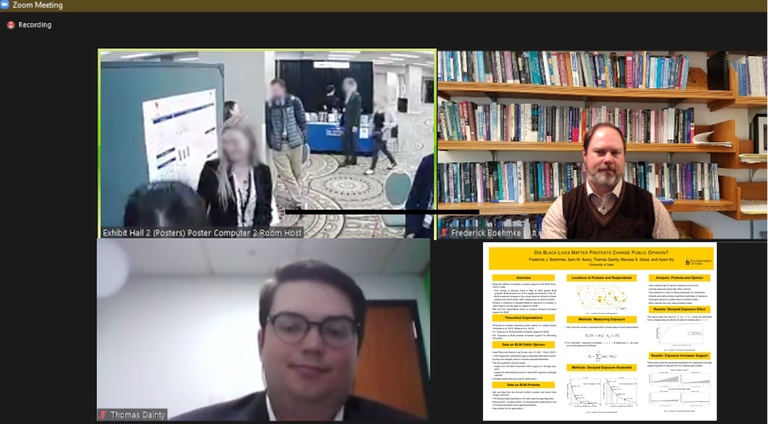 A team of IPOLers recently presented their research in a poster session as part of the 79th Annual Midwest Political Science Association Conference. Interested in the BLM’s influence on public opinion, Sam Avery, Marissa Good, and Thomas Dainty have participated in the Black Lives Matter protest research as a spin-off project of IPOL since the summer of 2021. Under the guidance of Professor Boehmke, the student research group combined protest data with IPOL’s survey conducted in February 2021.

The study examines public support for BLM and for defunding the police. In particular, the study evaluates how close survey respondents were to nearly 150 BLM protests in Iowa. The analysis finds that nearby protests increased support for the BLM movement in general and, to a less extent, for defunding the police, but only when those protests occurred with a few miles of respondents. The results suggest that protests may affect public opinion, but only within a very narrow range of a few miles.

IPOLers who worked with BLM and public opinion shared that the project helped them learn to work with data. Marissa Good commented that she “learned a lot about analyzing data and specifically learned how to create maps and run analyses in the software Stata.” She also expressed her enthusiasm to continue IPOL research in the upcoming semester. Echoing Marissa Good, Thomas Dainty further underscored that he “also learned how to better use a literature review to influence and guide research practices when conducting a study”.

View results and more information about the research linked below.